Should BoZ be counting Eurobond proceeds as part of forex reserves?

I have noticed that the Bank of Zambia (BoZ) has been reporting the proceeds of Eurobond issuances as part of the country's stock of foreign exchange reserves. To illustrate, I report in Figure 1 the end-of-quarter forex reserves as reported by BoZ in their Fortnightly Statistics Bulletins. The data runs from the first quarter of 2012 (12q1) to the third quarter of 2015 (15q3).* 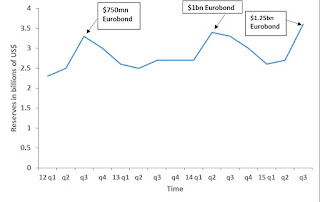 Sources: Bank of Zambia and Ministry of Finance


As is clear from Figure 1, build-ups in forex reserves have coincided with successful issuances of Eurobonds. For example, in the third quarter of 2012 (12q3), the country issued its first ever Eurobond valued at US$750mn. Coincidentally, in the third quarter of 2012, our stock of forex reserves increased from about US$2.5bn at the end of 12q2 to about US$3.3bn at the end of 12q3. Thereafter, there was a steep decline in forex reserves probably as the money was released for infrastructure projects and/or utilized to intervene in the forex market (I have covered the last point before).

The stock of reserves was largely flat in 2013. Thereafter, there is a steep rise in 14q2 (second quarter of 2014) when reserves rise from about US$2.7bn at the end of 14q1 to about US$3.4bn at the end of 14q2. Coincidentally, a second Eurobond of value US$1bn was issued in 14q2. The reserves are immediately drawn down for, perhaps, the same purposes reported in the previous paragraph.

It appears then that the Central Bank is including the proceeds of Eurobonds in reporting the country's international reserve position. This point was sort of confirmed when the Minister of Finance, in his Budget Address to the National Assembly last Friday, had this to say:

[A]s at end-September 2015, Zambia’s gross international reserves stood at US $3.6 billion compared to US $3.1 billion recorded at end-December 2014, representing 4.4 months of import cover. This improvement was partly on account of inflows from the recently secured sovereign bond.


Should the Bank of Zambia be including Eurobond proceeds in reporting our forex reserves? This does not make much sense to me at a conceptual level given that forex reserves should really be thought of as assets. In other words, in building up reserves, the Central Bank should go into the forex market and *buy* and thereafter *own* the reserves. By including Eurobonds in their reporting, it seems to me that the Central Bank is counting what really is a liability as an asset. They are bonds after all, right?

Unless BoZ has been purchasing the Eurobond proceeds from Central Government, using Kwachas immediately when the money comes in from abroad. But even then, doing so would imply that these are really temporary assets since the primary reason for issuing the Eurobonds was so that we could use them for infrastructure projects. In other words, Central Government would still want to have the US dollars back at some point to use them for their intended purpose. That is, BoZ  would still be in the position of treating a liability as an asset.

The good folks at BoZ are way smarter than I am. There must be something that I am missing in my story. Can someone help me out?


* The latest Fortnightly Statistics Bulletin from BoZ does not contain data on forex reserves for 15q3. The number for 15q3 reported in the Figure 1 is taken from the 2016 Budget Address by the Minister of Finance.
Posted by Grieve Chelwa at 11:14 1 comment:

Grieve Chelwa
My name is Grieve Chelwa. I am currently the Director of Research at the Institute on Race, Power and Political Economy at the New School. From 2018 to 2021, I taught economics at the Graduate School of Business at the University of Cape Town where I was the Co-Director of the MBA Programme. From 2016 to 2017, I was the inaugural postdoctoral fellow at the Center for African Studies at Harvard University. I hold a PhD in economics from the University of Cape Town. This blog keeps an eye on Africa in as far as economic matters are concerned with a bias towards Zambia, the country of my birth. More of my general writing can be found at the blog Africa Is A Country and here and there on the internet. My more academic writing is available on my google scholar page. You can reach me at grievechelwa@gmail.com with comments or suggestions. My twitter handle is @gchelwa.