The Big Zambian Growth Slow Down

The IMF was in town and released a press statement late on Friday (as per their tradition) summarising their findings. The gist of the statement was that the Zambian economy was under "intense pressure" (their words) and it's looking increasingly likely that a bailout is in the works.

For this post, I want to focus on a striking statistic mentioned in the IMF's press statement. According to their preliminary assessment, the rate of growth of the economy (GDP growth rate) for 2015 was only 3%. Their assessment, if accurate, implies that this is the lowest growth rate the economy has registered in 15 years (see the figure below). 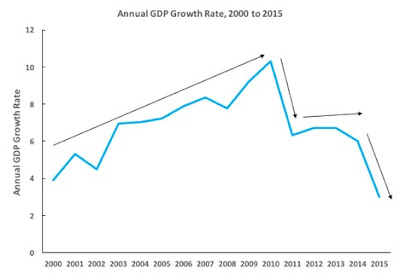 In 2000, the economy grew by about 4% and the rate of growth increased right through that decade. The average growth rate for the decade 2000 to 2010 was a healthy 7% per year and in 2010, for probably the first time in our history, we hit double digit growth. The economy, in that year, grew at 10%! Since then, the trend has been downward, although still respectably healthy. For the four years running from 2011 to 2014, the average rate of growth has been 6%.

So the 3% for 2015 is really an outlier in what has otherwise been an incredible growth story.

We need to quickly get the economy growing again at about 7% per year.
Posted by Grieve Chelwa at 08:50 No comments:

Is Minister Kaingu trying to tell us that government is broke?

This week, the Minister of Higher Education Dr Michael Kaingu announced that government would scrap off the payment of meal allowances (popularly known as “BC”) to students at the University of Zambia (UNZA) and the Copperbelt University (CBU). According to him, the government had decided to withdraw the allowance because it “has been abused and that it has over the years been a source of unrest at the two universities”. Meal allowances have been an institution at the two universities and I was lucky to get “BC” during the time I studied at UNZA. Life would have been unimaginably difficult without BC, coming as it did at a time when there was great financial uncertainty for my family. That's my wife's story too. And my sisters' story and countless others who have benefitted from BC over the years and gone on to join the ranks of tax paying citizens.

My point here is not to debate the Minister’s reasons for scrapping off the allowance, even though he doesn’t provide any evidence for his assertion. For instance, is he saying that the payment of meal allowance leads to unrest (for example, cash flash students go get drunk and then throw stones at cars)? Or is he saying that students become unruly when the meal allowance is not paid on time? The conclusions one can draw are radically different depending on what’s causing what. Nor do I want to debate the legality of the decision he’s taken. Others have done so. Nor do I want to be roped into a debate about the unfairness of having few students obtain meal allowances when students at other colleges and universities aren’t doing so. Of course it's unfair that only a minority of students in the country get the allowance. But scrapping it off for everybody is a terrible type of equality - it meets the fairness principle but most people, when pushed, would see that this is undesirable. Instead we should achieve equality by moving in the other direction: making sure that every student gets the allowance. But that’s a post for another day.

What I want to point out here is that the government’s decision says something about the country's fiscal situation. The decision is controversial if not unpopular (have a look at the commentary on social media). So why would a government announce what appears to be an unpopular decision a few months before a general election? Election years are for dishing out largesse not scrapping it off.

The only answer I can think of is that the government’s finances are currently stretched. Have a look at the figure below that tracks annual interest payments on the country’s outstanding stock of domestic and external debt from 2012 to 2016. 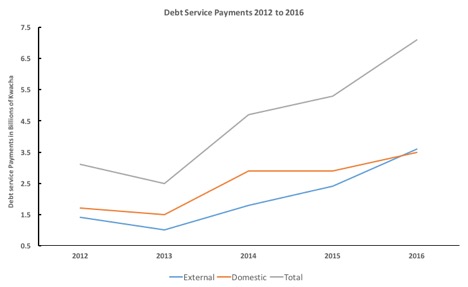 Now according to the 2016 budget, the total budgeted for “Student Loans and Bursaries” is K310million (this is a total figure that includes the meal allowance). It is far less complicated to cut funding to this or that social service than to miss an interest payment when a government is debt stressed (there’s actually academic evidence showing this). Missing an interest payment screams loud and clear that you are broke. You can't spin this any other way. On the other hand, you can spin cutting back social spending by simply saying that it was being wasted or it encouraged unruly behaviour (after all, who hasn't heard of the entitled car-smashing students).

The money originally meant for student loans and bursaries doesn’t, however, come close to plugging the fiscal hole. Implication: Times ahead are gonna be tough.


* The numbers presented here are in nominal terms. The distinction, in my opinion, between real and nominal doesn't matter so much here because inflation has been quite low over the period covered - the uptick in inflation only happened towards the end of last year after the budget for the current cycle had already been announced.
Posted by Grieve Chelwa at 07:09 No comments:

Grieve Chelwa
My name is Grieve Chelwa. I am currently the Director of Research at the Institute on Race, Power and Political Economy at the New School. From 2018 to 2021, I taught economics at the Graduate School of Business at the University of Cape Town where I was the Co-Director of the MBA Programme. From 2016 to 2017, I was the inaugural postdoctoral fellow at the Center for African Studies at Harvard University. I hold a PhD in economics from the University of Cape Town. This blog keeps an eye on Africa in as far as economic matters are concerned with a bias towards Zambia, the country of my birth. More of my general writing can be found at the blog Africa Is A Country and here and there on the internet. My more academic writing is available on my google scholar page. You can reach me at grievechelwa@gmail.com with comments or suggestions. My twitter handle is @gchelwa.